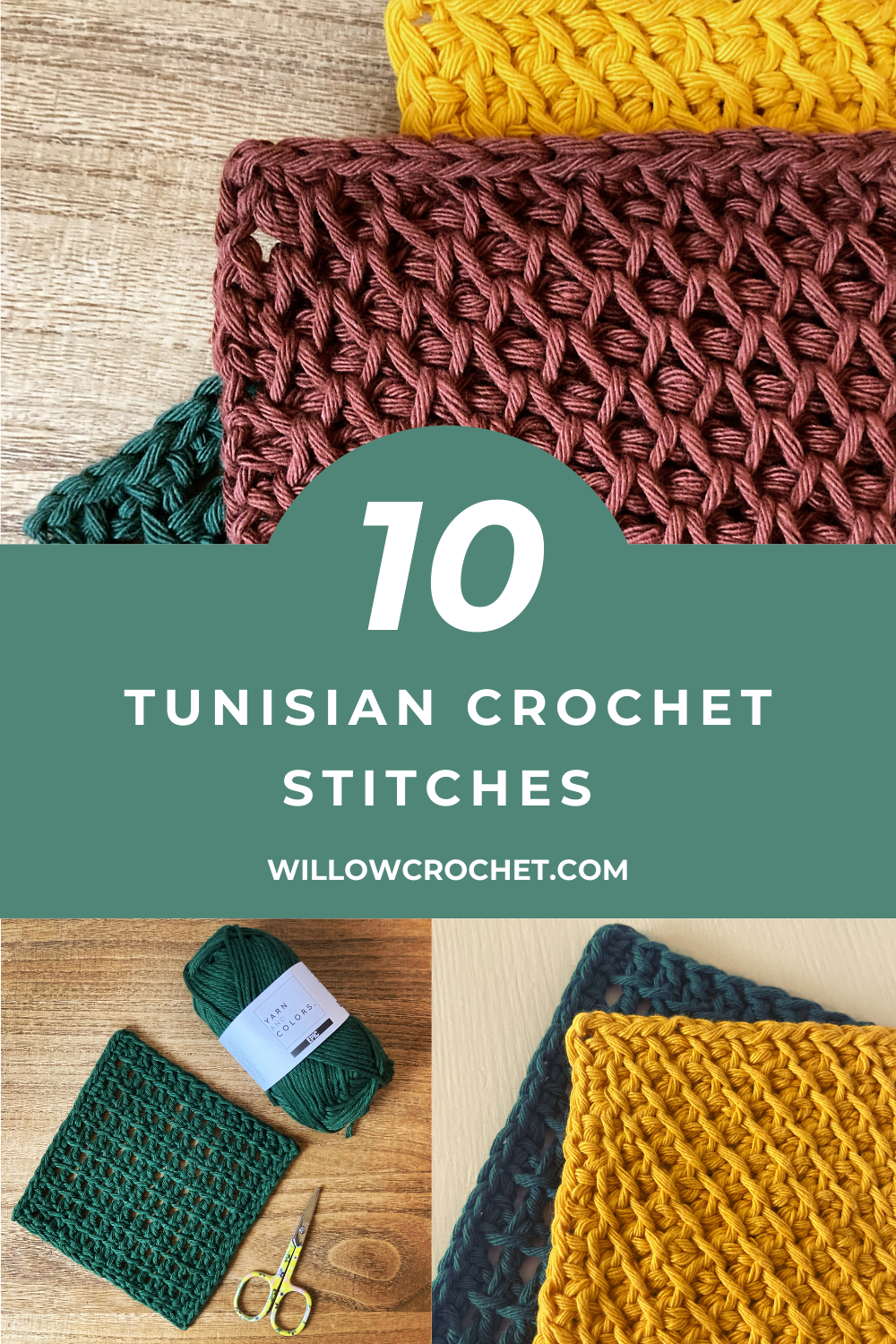 Recently I’ve been delving into the world of Tunisian crochet and I’m absolutely hooked! So much so, that my 2021 Temperature blanket is being made with Tunisian crochet. I’m making three panels using Tunisian simple stitch and can’t wait to watch this project grow over the next year. If you haven’t already started a 2021 crochet temperature blanket, it’s not too late to begin now. My previous blog post ‘Ten Temperature Blanket Crochet Patterns’ is a great place to get started! I’m currently a week behind on mine already as I’m waiting for the rest of the yarn to arrive but, you can see the first five rows in the photo below.

If you’re new to Tunisian crochet I highly recommend giving it a go! You can create completely different textures to those in traditional crochet, in fact, many Tunisian stitches more closely resemble knitting. The process of Tunisian crochet is somewhat similar to knitting as well, in that you keep loops on your hook as you can see from the photo of my temperature blanket. To do this you will need to use Tunisian crochet hooks, which are longer than standard hooks and sometimes have interchangeable cords, similar to some knitting needles.

If Tunisian crochet is something you would like to try, I’ve compiled a list of some of my favourite stitches that I’ve learnt so far, all of which would be perfect for a beginner to learn!

Tunisian simple stitch is the first stitch many people learn when picking up Tunisian crochet for the first time. As the name suggests, it is one of the easiest stitches to master. It has a one-row repeat and can be worked over any number of stitches. For the forward pass, you work into the vertical bars which are easily visible in the picture above. This stitch is perfect for anyone who is new to Tunisian crochet.

The Tunisian full stitch, also known as the Gobelin stitch is a two-row repeat stitch. This means there are two different forward passes which alternate each row. Unlike the previous two stitches, this one is worked by pulling up loops between stitches instead of working into the stitches.

The Tunisian mesh stitch creates a loose fabric making it ideal for shawls or market bags. There are a few different types of mesh stitch but the one I have made for the photograph is a one-row repeat over an odd number of stitches. This is a really simple Tunisian stitch which works up very quickly so is ideal for beginner Tunisian crocheters.

The Tunisian diagonal lattice stitch is instantly recognisable by its sloping bars. It’s another stitch which has a two-row repeat and is worked over an odd number of stitches. I’ve seen this stitch used in a few Tunisian crochet headband patterns – a quick and easy project for your first Tunisian crochet item.

The Tunisian arrowhead stitch somewhat resembles the Tunisian mesh stitch but, is slightly more complex. Unlike the mesh stitch, it has a two-row repeat but still creates an airy fabric, making it perfect for summer garments.

The Tunisian brick stitch is the first of two stitches I’ve included which incorporate colour changes. This one creates straight lines and sharp edges accentuating the contrasting colours. Rather than working over an even or odd number of stitches for this one, you’ll need a multiple of 4 + 1. Although this stitch looks complex it only uses the Tunisian simple stitch and the long Tunisian front post double crochet which is much easier than it sounds!

Finally, the Tunisian wave stitch, the second of the colour change stitches I’ve included. Whilst the brick stitch works best using just two different colours, the wave stitch can be used with as many colours as you like. For this stitch, you’ll need to use the Tunisian slip stitch, simple stitch and double crochet. It’s certainly one of the more difficult stitches on the list but, it looks amazing and would work well for a rainbow blanket.

Let me know in the comments which Tunisian crochet stitch is your favourite and which one you’ll be trying next!

We're not around right now. But you can send us an email and we'll get back to you, asap.